THE TRANSFORMATIVE POWER OF ART ON MISSION | PART 3

This post is part of a series that shares how God transformed community through a group of SVA artists on mission in Europe with Saddleback Church’s PEACE Plan.

The main art project for the SVA’s PEACE ministry last summer was Everyday Icons, developed in collaboration with Marius Ancuta of Saddleback Berlin. Through it, we put into practice the use of art to reach others, whether in Santa Ana, CA, in Spain with EDGE, or in Berlin.

Everyday Icons functioned as an interactive installation, incorporating live portraiture, painting, and hand-lettering. To implement the project, we chose populated public spaces, including busy streets, a famous monument, and a popular park. Each installment of the project began as our team assembled a large, freestanding frame that was seven feet tall and up to fourteen feet wide. The frame then took on a neo-baroque style as we decorated it with trash and junk we had gathered locally. The “canvas” we placed inside the frame was made of thick transparent plastic, allowing artists to work from both sides to create portraits, paint halos, and write text. But even before we began filling the canvas, simply setting up the piece drew people in as it created a compelling spectacle.

Our team of artists drew, painted, and wrote. As the piece took shape, the public’s engagement deepened. Curious onlookers would ask, “What are you up to?” and someone from our team would respond, “We’re creating a public art piece. Do you want to have your portrait drawn for it?” The usual response was “Yes,” coming with surprise that it was free. We would begin to draw their portrait right there on the transparent canvas, looking into their eyes, capturing details of their identity. They’d step back and watch another artist come and paint a colorful halo around their portrait, making it pop with color. Then another artist, usually our hand-lettering expert Mandy, would come and incorporate words of truth and encouragement into the portrait, such as “Your dreams are important,” “Spirit of Boldness,” or “Lover of Truth.” While this was happening, team members would take the section of the junk-made frame nearest to the finished portrait and paint it gold, turning the frame into something precious and beautiful as each portrait was finished.

While some of our artists engaged people with the visual side of art, two of the musicians on our team would infuse the space with music. Cody, a hip-hop beat creator would play his custom beats or rap for the crowd that stood watching. Megan, one of our church’s worship leaders, would play the guitar and sing. This gave the art space a special atmosphere and energy.

Everyday Icons became an experience of sight, sound, and conversation.

As the clear canvas began to fill up with the redemptive portraits of the people we met, we painted lines to connect them in symbolic unity, ultimately centered around and leading to one central image. This image would change based on each community we engaged. At one point, it was a hand with a key, another time it was three gold circles. But whatever the image was, it represented God as the center of transformed and holy community.

Everyday Icons spoke symbolically to the holiness and value we find in God. Those who stopped to look at it saw this message unfold before their eyes and, if they chose, become part of it. Everyday Icons was our team’s way of saying, “it’s not what we do that gives us purpose or that makes us holy, it’s who we know.” Through Christ, God takes us into his family, speaks words of love over us, makes us His saints, and gives us purpose.

Everyday Icons opened up some great opportunities. Come back next week to read about a few of these. 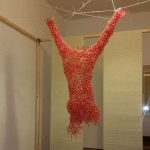 The Momentum of Church and Art: Reflections on the Loop of ResurrectionUncategorized