This post is the final post in a series that shares how God transformed community through a group of artists on mission in Europe with Saddleback Church’s PEACE Plan.

Over the summer, SVA implemented the power of Art in the dynamic missions engine of the PEACE plan, both on a Global and Local scale. Our team served those both inside and outside our church family. As we prepared to return home, the final task for our team was to solidify the equipping we modeled into something sustainable for our church family in Berlin. As we grew to know and love Marius, Flavia, Hannah, Feli, Katrin, and the other creatives of Saddleback Berl­in, it became apparent that their community was ready to be empowered with an SVA of their own. All it would take was a willing and ready leader.

During the final days of our PEACE trip, I commissioned our artists from Berlin to carry the torch of creativity at their campus by beginning monthly gatherings with the artists in their church community. A small flame was lit in the hearts of our Berlin family during our time there. I could see that the coming year was going to contain more big steps toward the vision of a creative church culture reflecting God’s creativity. Among the community of artists and creatives, I asked Marius and his wife Flavia to lead the monthly gatherings.

Of all the prophetic symbols, new promises, and hopeful images that came out of this season, I think the most encouraging was a small 8×10” painting from a two-year-old boy. One of our team members, Steven, stayed another three weeks in Berlin to continue serving. He was at Marius’ house for a final dinner with his family, looking back on all that God had done throughout the summer. As Steven was about to walk out the door after a final goodbye, Marius ran off down the hall to get a gift. Coming back, he held a tiny abstract painting on canvas board, painted with muddied primary colors, scattered and globbed around the surface.

Marius asked Steven to bring it back to Lake Forest and to give it to our team and our ministry. Marius wanted it to serve as a symbol of what we had awakened in his life, his family, Saddleback Berlin, and our now shared ministry. The painting became the symbolic promise of a new creative culture being birthed into our family of faith, the gift of creativity that would be passed on through generations. Movingly, it was the very first painting of Marius’ firstborn son, Johannes.

This painting now hangs in the art studio at Saddleback Lake Forest. It stands as a reminder of our church family in Berlin and of all God has done and will continue to do. We are daily moving forward with our mission to bring creativity more fully into our church. We do this because we know that our Creator God would want a creative church. The PEACE trip over the summer was the start of a greater vision of that creativity moving into the church and impacting the surrounding culture. The painting stands as a call to continue forward in this journey of empowering creative people to reflect God’s creative soul. It stands as a symbol of the future of our ministry and of the power of art on mission to transform lives. 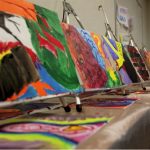 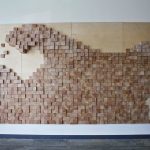