THE TRANSFORMATIVE POWER OF ART ON MISSION | PART 4

Everyday Icons was an effective art project during SVA’s PEACE trip to Spain and Berlin. A few stories surrounding it stand out as poignant examples of how God used our art expressions to effectively reach others

Marco (right) smiles in front of his finished portrait.

As we ran Everyday Icons in Altea, God brought a young man to us. Marco had already connected with us at one of our community meals and now he returned to take part in our weekly Art Night. I drew his portrait, the team painted in a bright halo, and Mandy wrote the words “Your dream is important” around the image. As he and I sat back and watched the art project unfold, he contemplated his portrait. I read the words next to it and asked him, “So what is your dream?” With a smile on his face he said, “To follow Jesus.” Marco had caught sight of this dream earlier that week during our community meal. He saw what we had in Jesus and wanted it for himself. I shared with him how this portrait wasn’t just a symbol of his future dream as God’s son, if he accepted Christ, it would be his true identity—today, now. He was deeply encouraged. Through this glorified portrait and the conversation I had with him, Marco saw that his dream could be a reality. He made it so that night. As we sat among the artists and onlookers, Marco saw a new understanding in his present identity in Christ.

Everyday Icons proved successful wherever we took it, but in Berlin’s Mauer Park, we engaged the people for whom it was designed in an ideal location, both for its importance as a community gathering place and its historic symbolism. Mauer means “wall” in German and the park gets its name from being created out of reclaimed land that comprised a dead zo ne, part of the Berlin Wall barrier complex. A section of the wall still stands in the park. Now, decades after that barrier was torn down, Mauer Park is a place where everyone—elderly couples, local hipsters, families, street artists and basketball players—all find themselves at home. It’s an unofficial center of cultures in Berlin. Megan and Steven, both members of our team who had served in Berlin before, suggested this location in our planning stages, seeing in it an important location, a profound history, and a gathering place for communities that would be ideal for Everyday Icons.

A local in Mauer Park poses behind our clear canvas as Austin sketches.

The people of Berlin we met that day in Mauer Park were attracted to the art installation. They initiated conversation with us and, in response, we shared with them affirmations of their value and identity. The symbolism inherent to the art project made it easy for us to enter into conversation. In this post-Christian city, we both shared the gospel and invited many to visit Saddleback Berlin.

Christianity is often immediately refused by many in Europe because of the Church’s history of judgmentalism, closed-mindedness, and rules-focused living.

What makes art such a powerful tool for Christians sharing the gospel there now is that art speaks a heart language of freedom and love.

It comes with a spirit of openness and acceptance, not judgment. This is why using art in a post-Christian society is so powerful. The defenses that people hold up against the Church are easily dropped as they engage with art. People are able to see Christians through a new lens. When we speak our faith through the medium of art, the essence of our faith becomes clear again. That’s how God called out to Marco in Spain and it’s why our art projects were effective in Berlin.

When we talked with Germans in the context of Everyday Icons, we did not have to tackle any barriers or negative views. Instead, we just shared the symbolism of the art that spoke to their purpose and value as God’s children. Within 200 feet of the old Berlin Wall, this was a powerful expression to our team and to Saddleback Berlin that people’s walls go down when the gospel is shared through art.

Everyday Icons was the focal point of our outreach in Berlin, but we used other art expressions to continue to tackle spiritual emptiness there. As we partnered with Saddleback Berlin, our art expressions fit into their campus’ Local PEACE outreach.

Next week, come back to read the story of using art to reach refugees with Local PEACE.

The Momentum of Church and Art: Reflections on the Loop of ResurrectionUncategorized 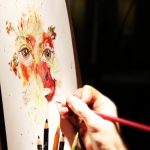