THE TRANSFORMATIVE POWER OF ART ON MISSION | PART 2

The Lake Forest team stands together with the Berliners for the first time in Spain.

This post is part of a series that shares how God transformed community through a group of SVA artists on mission in Europe with Saddleback Church’s PEACE Plan. We knew God was up to something. We sensed that He was going to empower and unite the members of our team to do great things. The trip to Spain and Berlin was the first time our arts ministry went abroad and the first PEACE trip to combine Saddleback members from two international campuses. We wanted to be prepared for the big things we knew were waiting for us in light of that, so, we planned for our trip to begin with thirteen days of discipleship, training, and implementation under the umbrella of the EDGE Project. EDGE is an organization committed to discipling people to use their creative gifts to reach the larger culture for Christ. This time grew us closer in unity and prepared us for what God was leading us to as artists and mission workers in Berlin and beyond. While working with EDGE, we were encouraged and empowered to live out our calling as artists on mission. We made art in the streets as a way to invite people into conversation. We cooked and hosted community meals in the homes that we lived in to create deeper community. We hosted Floral Gatherings for women in order to help them rediscover their true beauty through flowers, food, and friendship. We played music and rapped in the streets where passers-by stopped and listened, giving these spaces an atmosphere of worship. In all these ways, ours was a simple invitation to bring people into an attractive form of community that was both influenced by and infused with the arts. During our time in Altea several people were introduced to Jesus these invitations and interactions… two of them made decisions to follow Him!

Our team greeted Marius as he arrived in Spain, marking the first time our Lake Forest family came together with another international campus to serve in another country on PEACE.

One aspect of this style of invitational living was uniquely inline with our team’s purpose, the weekly Altea Arte nights. During these, we displayed our most recent works of visual art, played new music, or read poetry in a courtyard that was at a central cross roads in the town. People walking by would stop and investigate. Much of the time they’d ask, “So what’s this all about?” or “Where are you guys from?” From the beginning, they were initiating the conversation, asking the questions, and openly engaging with us. We did not have to try to grab their attention or fight for their time.

The creative display had already captured their hearts and minds; they were ready to engage in conversation.

From there, we could take the conversation in any direction we felt led. It could be about the deeper meaning of the art, about our background that influenced the art; or about them and what they experienced. It seemed natural in ma

Mandy, a culinary artist, puts the finishing touches on one of our community meals in Spain.

ny of these conversations to begin talking about God and spirituality. At points, some of us shared the Gospel. As we lived in the community, we made connections using art and the power of invitation. Conversation and relationship unfolded naturally. It was an incredible way to do ministry, the way Jesus modeled. This style of ministry empowered by art would prove to be effective no matter where we took it.   Written by Jason Leith  Edited by Steven Homestead 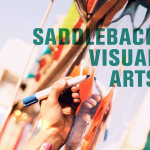